OTHER MARINAS GET A QUOTE

The postcode for your Sat Nav is TQ2 5EQ.
From Exeter, take the A380 to Newton Abbot and then on to Torquay. On entering the outskirts of Torquay, follow the signs for Torquay seafront and harbour. At the seafront turn left and follow signs for the harbour.

There is a main line station in Torquay. The marina is only 5 minutes away by taxi, or 20 minutes walk along the seafront. Use the National Rail Enquiries website to plan your journey.

Enter Torbay either direct from the NE; or via Berry Head from the southwest. The town of Torquay is easily identified by day and night. May to September – steer for a green buoy, QG, 200m west of Haldon Pier head, then head east into the harbour. Turn north for the visitor berths on A pontoon. October to April – Day – head for large white building 'Princess Theatre' situated shore end of Princess Pier until past the harbour mouth then east into harbour and turn north for marina and visitor berths. October to April – Night – at night entrance lights can be obscured by promenade lighting. Directions as per Winter day. Call the marina on VHF Ch 80 for a vacant berth. 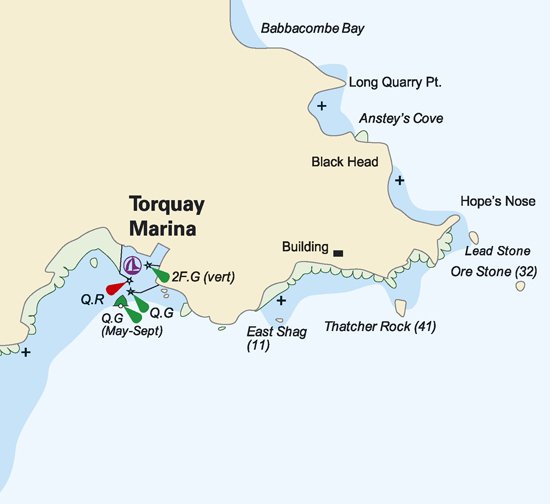 Chart not to be used for navigation. Copyright Adlard Coles Nautical. Reproduced by kind permission of the publishers of Reeds Almanacs.

Discover more about this Marina

Not found what you're looking for?
Visit our Services Directory

We use cookies on this site to enhance your user experience - Learn More
OK, I Accept